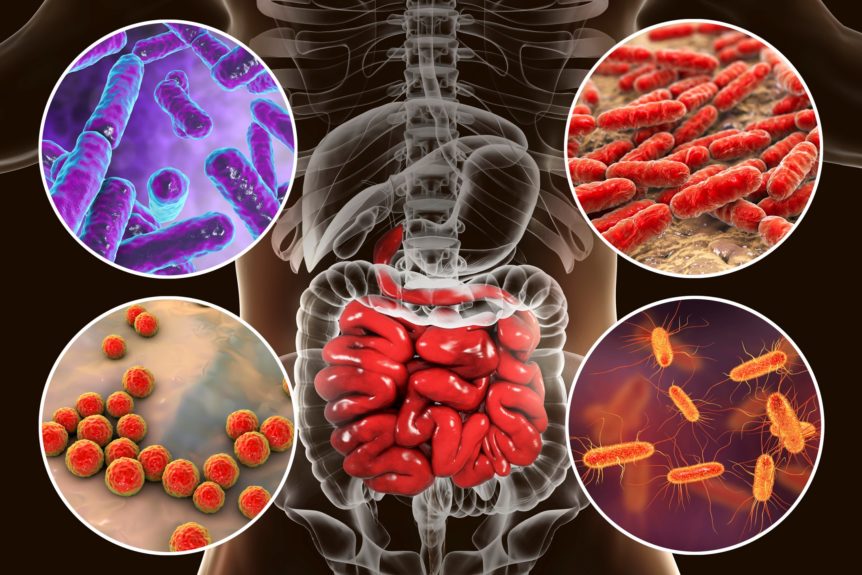 The small intestine is the powerhouse of the digestive system, accounting for 90% of the digestion and absorption of the food we eat, and is also the largest part of the gastrointestinal (GI) tract at an average of 20 feet long. The inside of the small intestine is made of finger-like protrusions called villi, which, in combination with overall length, give the small intestine 2,700 square feet of absorptive area! That’s the size of a tennis court. In my opinion, the intestines were misnamed since the “large” intestine only received this name due to it being a little bit bigger in diameter (4-6cm) than the “small” intestine (3.4-4.5cm).

As the powerhouse of digestion, the small intestine must handle many things that come through it, like gastric secretions, enzymes, food particles, bacteria and other pathogens. The small intestine regulates which particles stay in, and which go out, via diffusion, into the blood stream. This regulatory process is more complicated than originally thought and has been the basis for many new health-related discoveries. Though much has been discovered, much mystery remains as to the exact mechanisms involved.

In the walls of the small intestines are spaces between the cells that are usually closed.  These spaces are called Tight Junctions and are the mechanism by which selected small molecules (amino acids, electrolytes, water and other nutrients) are allowed into the bloodstream to be used by the body. Tight Junctions are like gates that open and close and the gate keeper is a protein called zonulin. As of now, zonulin has been the only identified mediator that regulates our intestinal permeability, or the opening and closing of the gates. Various things increase the release of zonulin which, then determines the amount the tight Junctions are open and for how long they remain open.

Normally, the small intestine works beautifully to bring only nutrients from fully digested foods to the body, all the while protecting the body from undigested food particles, bacteria and toxins. Some individuals are genetically predisposed to having tight junctions malfunction. In these individuals, zonulin is upregulated or “overreacts” to stimulus causing tight junctions to open at the wrong time or remain open for too long. These individuals are at a higher risk for developing Celiac Disease, because the gluten protein is much more likely to go through the intestinal lining via malfunctioning tight junctions.  The immune system will then react by attacking the gluten protein.  With continued exposure to gluten, the immune system can get confused and begin to attack the gastrointestinal tract.

Most often, this genetic variation does not cause any issues until an environmental factor is also involved.  Unfortunately, the number of environmental factors, that stress our small intestine, have greatly increased, to the point that we are seeing increased incidence of Celiac Disease. Furthermore, we are even seeing people, without this genetic predisposition, developing issues with tight junctions in the small intestine. This malfunction is called increased luminal permeability or “leaky gut syndrome” and is being linked to many health conditions on the rise today.

What Does Leaky Gut, Unchecked, Lead To?

Leaky gut can also cause a lot of issues with absorption of healthy nutrients, leading to deficiency and malnutrition. The most common deficiencies are iron, B12, zinc and magnesium.  Deficiencies in these nutrients can lead to many different symptoms to include hair loss, severe fatigue, muscle cramps and rashes.

If environmental factors causing leaky gut are not removed, and the gut healed chronic inflammation will set in. This inflammation, in and of itself, perpetuates leaky gut because the white blood cells release things called mediators (histamines, prostaglandins, leukotrienes and cytokines to name a few) to attack the foreign particles leaky through. Unfortunately, these mediators left unchecked and continuously being released, cause damage to the body’s tissue, in this case, the lining of the intestine. This damage only worsens leaky gut, which then worsens inflammation which then… you get the point.

What Environmental Factors Cause Leaky Gut?

How Do You Know If You Have Leaky Gut?

There are a few diagnostic tests available, but they are mostly used in well-controlled research labs due to difficulty in interpreting results because of so many variables that occur outside of a controlled laboratory.

The symptoms below are a good indicator but it is best to meet with a healthcare professional who can help guide you.